We are very pleased to inform that we host in Poland new representative of Brazil,H.E. Mr. Alfredo Leoni, Ambassador of Brazil. 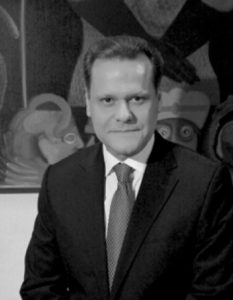 2006 –Post-Graduation at Rio Branco Institute, with a thesis on International Cooperation in Education;
Professional career:
1984-86 – Third and Second Secretary in Mexico;

1994-95 – Brazilian Delegate to the Sanctions Committee of the UN Secuerity Councuil;

2009-2015 – Ambassador in Islamabad and non-resident Ambassador to Afghanistan and Tadjikistan; during 36 years of his diplomatic career has also served in different areas of the Ministry of External Relations in Brasilia and headed several Brazilian delegations to bilateral and multirateral meetings, as well as international conferences.
Since June 23rd, 2015 accredited as the Ambassador Extraordinary and Plenipotentiary of the Federative Republic of Brazil to the Republic of Poland.